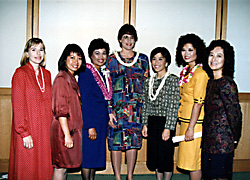 Over the years, HWLF has grown its endowment to almost a million dollars through its fundraising activities and events while at the same time distributing funds to worthy Hawaii organizations who meet its mission.

A list of our current and past presidents is representative of the remarkable diversity, strength, talent, and commitment of HWLF within the community.