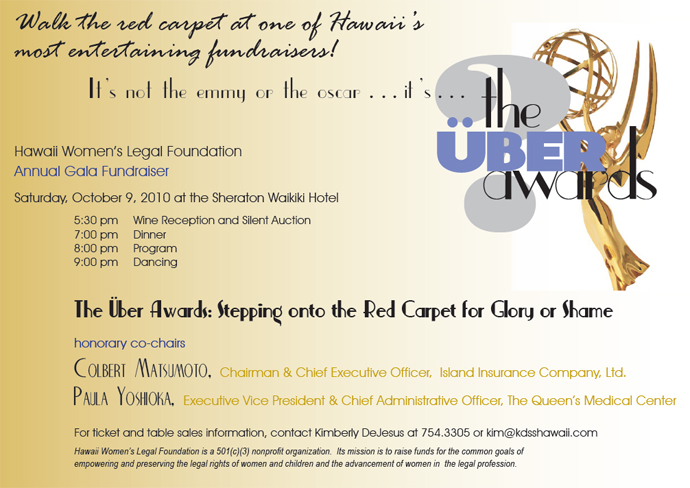 The silent auction included unique collectable artwork, along with certificates for hotel and resort stays, award-winning restaurants and golf rounds.

Previous years have been rich with political satire, featuring singing and dancing politicians, attorneys and other notable performers. In 2010, HWLF rolled out the red carpet and presented – not the Oscars or the Grammies or the Nobels – but an award of its own invention, “The Über Awards.”

Colbert Matsumoto, Chair and CEO of Island Insurance Company Ltd., and one of the event’s Honorary Co-Chairs, said “HWLF is a most deserving organization.  Its fundraising proceeds benefit the women and children of Hawai`i.  In the past, HWLF has awarded grants to Waikiki Health Center, Children’s Alliance of Hawai`i, Hawai`i Literacy, YWCA, Legal Aid Society of Hawai`i, the Domestic Violence Action Center, and the Kukui Children’s Foundation.”

Paula Yoshioka, Executive Vice President and Chief Administrative Officer of The Queen’s Medical Center, and the event’s other Honorary Co-Chair, remarked that “HWLF, together with its sister organization, Hawai`i Women Lawyers, were the recipients of the National Conference of Women’s Bar Associations’ 2009 Public Service award, in recognition of their “Mother’s Day Project,” where over 2,000 gifts were created for deserving children to give to their mothers, who could not otherwise afford to do so.”